BEING A HARBOUR FOR EACH OTHER 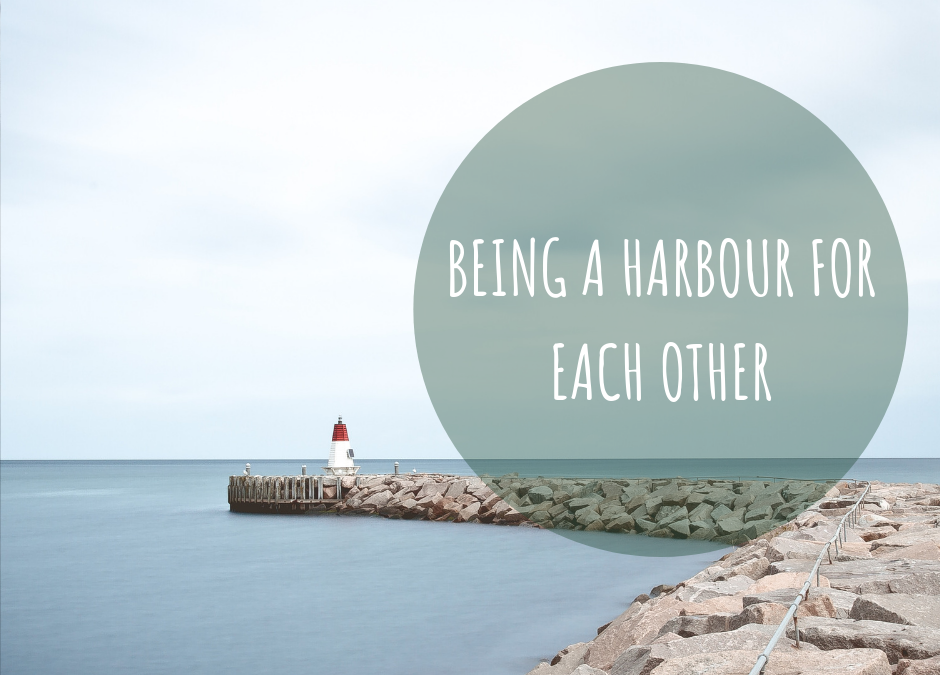 The last 6 months of my relationship.

While I reflected on the Voice Dialogue weekend theme: ‘Selves in interactions’, I realised how much of a journey I have had the privilege to go through in the last 6 months in my relationship with my boyfriend.  I would like to share it with you.

In the Autumn, 6 month ago my boyfriend D went on a 3 month retreat to give a boost to his buddhist practice as he longed to give it more time.  A bit before that we had a rocky moment that damaged some of the trust I had in the relationship, waking up old wounds.  We did work through it before he left and the adult parts in me felt a deep loving connection to him.

I was connected to this for the next two weeks.  After that as the warmth of his presence faded away some younger parts in me started feeling hurt and  unsafe.   Three months without seeing or hearing from him, loving him deeply and cherishing our relationship, but still not totally sure that he would be fully committed to me when he came back, I realised that the best things for me to do was to hold both polarities, both possibilities and get on with my life. Cringe.

This felt like an invitation, an exploration.  Moving away from the parts of me that were scared to be abandoned, like happened twice as a child. Helped with the love I felt for him I let go of control and decided to stay in the  in- between. To do this I reclaimed and offered to myself all that I needed to feel happy, content, safe and inspired.

What really helped me in this was the passion that I felt for my work ~ Christie Animas: exploring more of Voice Dialogue, Fooling and how it all weaves itself in daily life and beyond.  It was a really empowering place for me to take myself. And I am forever grateful for this work having  allowed me to tap into it over the last years.

From this place I greeted him 3 months later. Open, non attached, bit nervous and loving.  He have had a big realisation during the retreat and realised that he needed to go back to Ireland to look after his dad.  The way he shared that with me was clumsy and detached, but from the middle space that I was finding myself I could see that, and didn’t get triggered. I gave him time to share and then enquired gently of his feelings about the relationship.  From that space I offered him it felt like he opened and in a second we were back there in a deep connection, laughing at the clumsiness of the communication, feeling the love between us again.

After a while I felt myself dropping away from that awareness place and starting to feel the younger parts in me that  actually felt hurt  then and before he went, mixed with childhood stories.  From the re established connection he was then able to stay centred as I allowed myself to deeply feel what was going on for these parts. Healing was happening for me.  Instead of being left with hurt like I was as a child, there was a human being, present.  Through that connection deep feelings were felt.

This middle place that I practiced on during that 3 months retreat has a spacious ground in me now.  I have an image of an harbour.  A place that I can come back to and wait lovingly while the sea is rocky, while the boat is out at sea.  A space holding for the other and at the same time a comfortable and loving place for me.  Till it becomes my time to get caught by the waves and lose ground.  I can then experience the loving embrace and acceptance of someone else, like an harbour.  A place to land, to let the parts of me to be just how they are.

Acceptance. Space. Breath.  Release.  Acceptance.  Whether in a session, in a fooling workshop or in a relationship, acceptance feels to me like a fairy powder that just creates wonder.  It allows aspects in me to heal themselves,  by just having time to experience themselves.  I see it again and again that my work as a facilitator or my explorations as a human draws a lot from this magical alchemy that is acceptance.  There is a wider intelligence that is constantly moving and regulating itself as I allow what really is.

It is the spring now, six months later.

This harbour place is now also becoming the headquarters for some play and exploration time.  Knowing that I can come back to it anytime, I can venture more deeply into the different aspects in me.  Starting to play with polarities in myself and in interaction with trusted ones  I can taste better the uniqueness of each aspect in me and enjoy its qualities, ways of seeing things, acting and sensations.  I can move to the irrational, the silly child, the hurt one, the dreaming one, the wild part, the controller, the controlled, the one who knows everything, the one who doesn’t know…

Being able to relate and ‘play’ with  these different parts  offers many new tastes and experiences in this big food plate of life that I am eating.